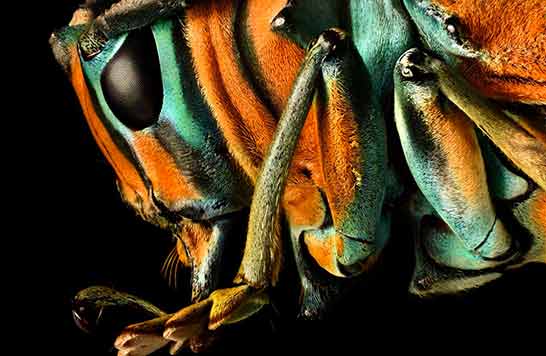 Microsculpture presents the insect collection of the Oxford University Museum of Natural History like never before. The result of a collaboration between the Museum and photographer Levon Biss, this series of beautifully-lit, high magnification portraits captures the microscopic form of insects in striking large-format and high-resolution detail.

On show in the main court of the Museum, surrounded by stunning Neo-Gothic architecture, the largest of Microsculpture’s photographic prints measure up to three metres across and surround the visitor. Seen alongside the tiny insect specimens themselves, this huge transformation of scale offers a unique viewing experience.

Text provides information about each creature in the show, while the photographs allow visitors to scrutinise tiny structures up close and then step back to take in the beauty of the insect as a whole.

The Museum of Natural History receives around 650,000 visitors a year and was a Finalist in the Art Fund Prize for Museum of the Year 2015. Its internationally-important insect collection contains more than seven million specimens drawn from every country in the world, including specimens from some of the most remote regions and islands. Combined, the Museum’s collections represent a vast repository of information on biodiversity.

The entomology collection also has significant cultural and historical value, containing the world’s oldest pinned insect specimen and many thousands of insects collected by pioneering Victorian explorers and biologists such as Charles Darwin and Alfred Russel Wallace.