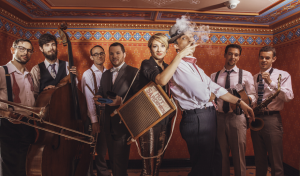 Take a blustery brass front line, add salty stride piano in the timeless image of Fats Waller and a frontwoman with the attitude and style of a 30s cabaret diva and you have The Hot Sardines in a seashell. And that’s not to mention the tap dancer!

The Sardine sound is steeped in hot jazz, gypsy swing – a slice of between-the-wars Paris via the New Orleans.  They’re sure to take the world by storm over the next few years — their debut album was named in iTunes ‘Best of Year’ list.

London learned about their star-quality at the EFG London Jazz Festival, where their two sold-out shows were flashy, fun and had the audience quite literally dancing in the aisles. The rest of the UK got a glimpse of the magic when they performed on the BBC’s Andrew Marr show and a UK-wide tour last year brought New York hot to halls all over the country.

Now, the Sardines are back with a new show, Champagne & French Fries (the title of their forthcoming second album), for a UK-wide tour.

‘One of the best jazz bands in NY today’ (Forbes Magazine)

‘Their live show was simply phenomenal, crisp musicianship going hand in hand with immaculate and witty showmanship. No detail was left undone, right down to the politely frenzied tap dancing of Edwin “Fast Eddy” Francisco. What a treat. Next time you can be pretty sure they’ll be playing a bigger venue’ (****  The Times)

‘Evan “Bibs” Palazzo and his sidemen know how to have fun without skimping on musicianship, while Miz Elizabeth delivers worldly-wise, Peggy Lee-ish vocals’ (The Sunday Times)